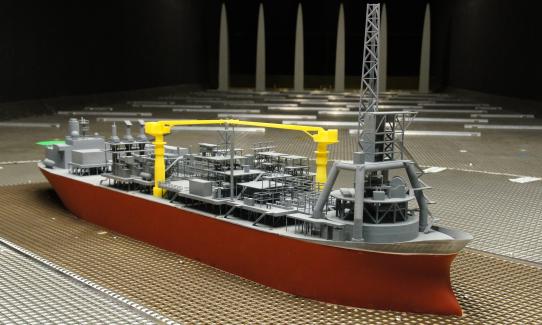 The Wind Load JIP is an international research initiative aimed at setting new standards for wind tunnel measurements of wind loads and CFD calculations for the maritime and offshore industry. Wind loads are of critical importance for stability of vessels and offshore units as well as for DP performance, mooring loads and interference between structures (i.e. tandem offloading shuttle tanker-FPSO). The research consortium consists of Marin, BMT, DNW, TUe and Peutz.

The main objectives for the Wind Load JIP are:

Peutz has conducted wind tunnel measurements of wind loads on a scale model of a FPSO and a semi-submersible production unit. The measurements have been conducted in 2 types of atmospheric boundary layer. The boundary layers were modelled according to ISO 19901-1 for wind velocities of 25 m/s and 45 m/s (at 10 m above sea level). The effects of changes in roughness of the boundary layer, variation of configurations as well as sensitivity to different types of set-up have been investigated.